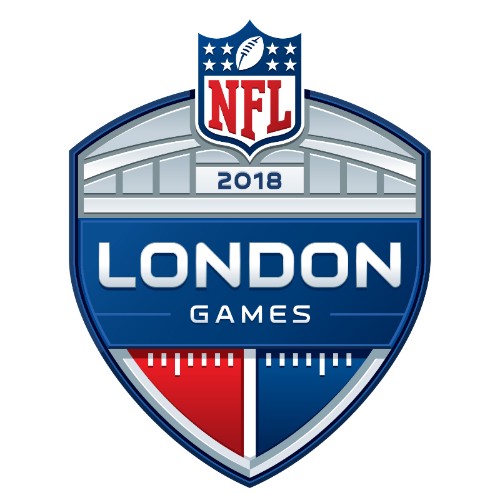 As I draft this, I’m literally on the way home from watching ‘my team’ The Eagles (2) beat the seemingly incumbent Jacksonville Jags at Wembley game 3 and I must say, the NFL is the light of my life right now. Having had an absolutely pants month at work I have had the saving grace of having the NFL roadshow in town to provide some sunshine through the dark occupational cloud that hovers in my vicinity. I’m lucky enough to be partly involved in NFL UK’s initiative to get flag football into school by hosting introductory and continue events for ‘kids’ all over the country. Having had the insider insight into how committed they are to the programme, I’ve loved watching it take off. 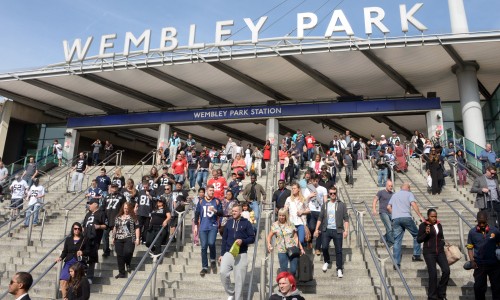 I was involved for the first time last year and one of the teachers that I worked alongside at an introductory events in south London was lucky enough, this year, to be presented with an award for his work towards getting the game off the ground at primary school level. He was awarded with tickets to today’s game and to top it all off he was presented at the game with two tickets to the super bowl!!! Seeing him up on the big screen being awarded for his dedication to the sport warmed my heart on what was a blooming cold day and showed me how the NFL are intent on inspiring the masses to get involved! 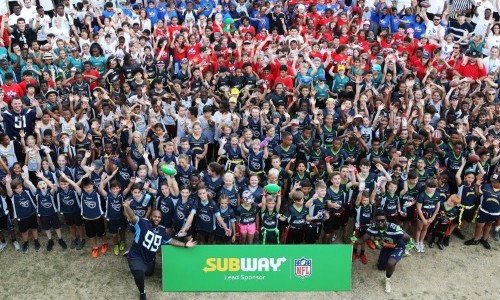 Having been at all the games this year, I can easily say that the game that was the least appetising prospect on paper (Titans v Chargers) actually turned out to be the most exciting contest, going right down to the wire with the Titans going for 2 with 37 seconds on the clock! Their attempt to take a 1 pt lead over the Chargers at the death ended with the crucial pass being tipped incomplete on its way to a receiver in the back of the end zone I was sat by! High blooming drama! So, a turn up for the books and a big advert for the pure fans that just love seeing a good game. 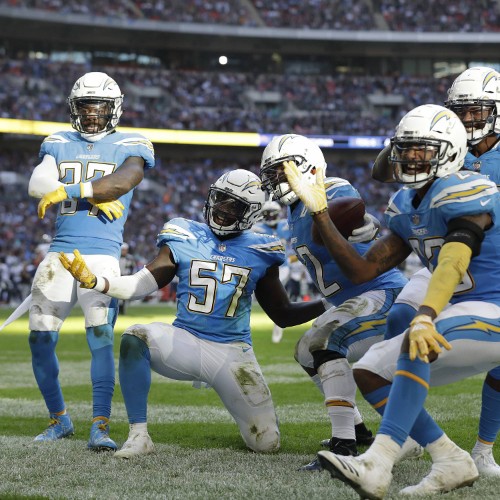 The atmosphere at Wembley is very very special. I’ve been to a Wembley soccer play-off final and I can say that was a game for one of the biggest prizes in soccer (promotion to the Premiership) but the NFL have cracked it with an awesome entertainment package for fans of all teams not to mention those of the teams that are actually over. I have worked for the NFL Fans First programme as a social steward since the 2017 games and they have done an awesome job making the fans experience as seamless as possible. Last year was a bit manic with the implementation of the clear bag policy being a major hiccup and the operation not running smoothly with getting the bags out to those that needed them, when they needed them and being frontline and having to tell fans we didn’t know where to get the bags was not a good look. But game by game they sharpened up. 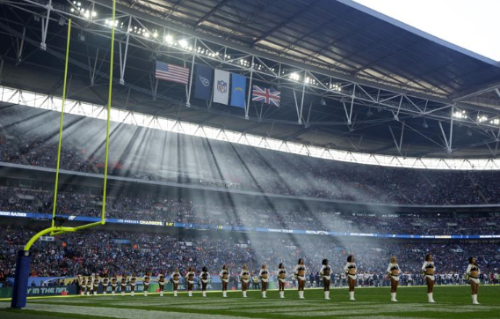 The delivery of what is a once in a life-time experience for a lot of UK fans is a finely tune operation with the management running round the Wembley site radioed up and constantly buzzing around keeping the finely tuned machine oiled and ticking over. I know without this London series I would have probably gone most if not all of my life not seeing a proper NFL game. Now I can say I’ve seen 7!!! Only 3 shy of my 10 years playing the sport for my one team! 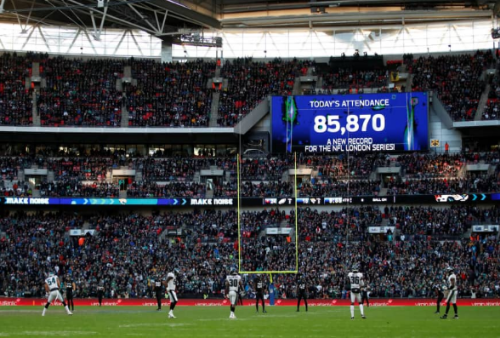 If you are thinking of going, think no more, it is a great day regardless of the teams on show. Granted, if your team loses on the day it may leave a sour taste but I can guarantee your heart and mind will be full of moments of magic from seeing the true fan experience that fly from all over the world to take in the spectacle that is ‘The Show’! The pre-game brand–happy tailgate (fans event with brand given the opportunity to market and entertain all at once), cheerleaders, marching bands, multiple mascots, fancy dress to mention only a few attractions and not forgetting REAL professional American football. Seeing these ‘superstars’ first hand is a sight to behold as the TV sometimes doesn’t do them justice. The first nine rows of Wembley’s side stands are shut off to enable the fans to see over these specimens and that for me says it all. Juggernauts collide, ball hawks fly, QB’s do ballet between oncoming traffic and launch rockets all on English soil for us all to see and marvel at. 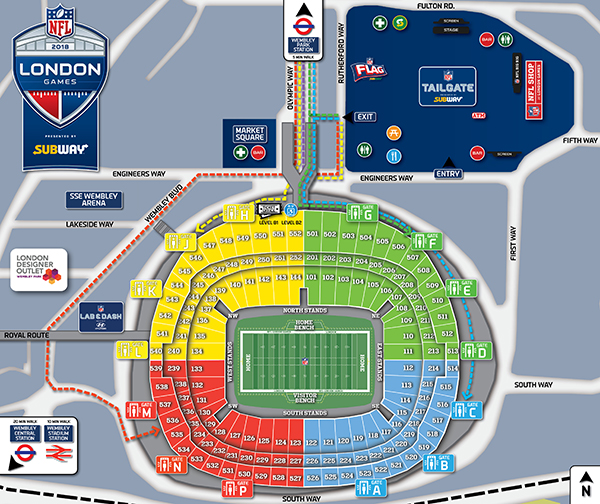 This year I saw (what was a first for me) two British comedians take on a wider receiver challenge at halftime and my local team Kent Exiles provided the assistance in running the drill/challenge. A young chap by the name of James Cook had the privilege of launching the balls for these guys to attempt catching in front of an 86,000 sell–out crowd (those that stayed in their seats at half-time anyway). He did a great job hitting their numbers on more plays than not with it all ending in a draw (to which the competitive cheer-happy ones amongst the crowd boo-ed off). But this was a young Man who I was lucky enough to meet and work with on the community events with (as he just won a youth national championship and had now graduated to the seniors) last year getting the chance to throw balls on the Wembley turf after having a colossal season leading his senior team to a return to the southern premiership might I add…good year if I ever heard it. Fine young man and a good programme getting a chance to bang heads with the ‘Southern Elite’ in the 2019 Season! 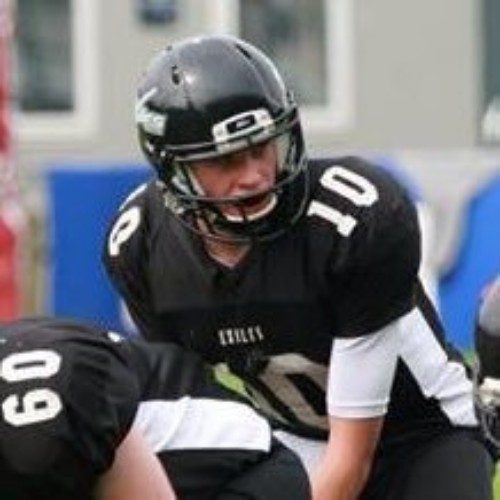 But in closing, the NFL have started something. They need to follow it through as the people have spoken with their feet and turned up for these games, lapping up most of what they’ve put out in relation to the Fan Experience. If I’m not correct, we were short changed a game this year so I’m looking forward up to 5 next year and Tottenham getting involved and that guy that threw all the money at buying Wembley making his next move to add another dimension to the pursuit of a UK based Franchise. The Fans here alone are a Franchise it seems looking for more and more to get behind so something home grown and home rooted would be an awesome step to take to solidify the passion that the UK has for THE SHOW!!!! 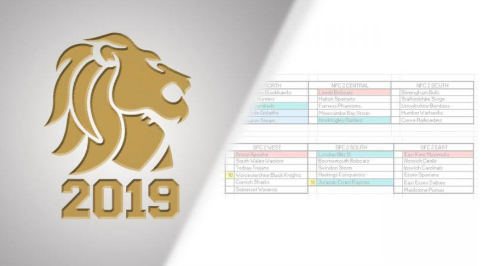 E-A-G-L-E-S…EAGLEEEEESSSSSSSSSSS!! S/O to my first Eagles Crystal Palace for ending Arsenal’s winning run as I predicted today too. Cherry on top of a great day! 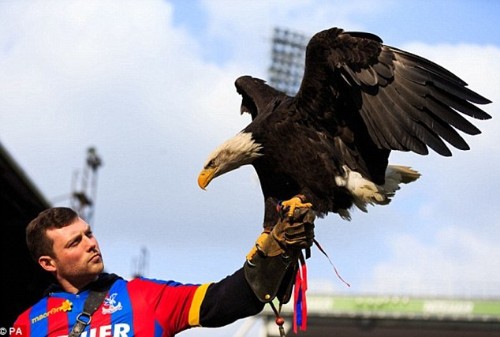