We’re back into the swing of things, Tyler and I are hitting on some big players for you guys week in and week out now. For week 7, I’ve gone a little off track and chosen quite a few guys I haven’t gone for this season, but I’m confident we’ll come out with the W. As always you can hit me up on twitter @mrplattypus for any further fantasy advice and make sure to listen to The Daft Kings Podcast! 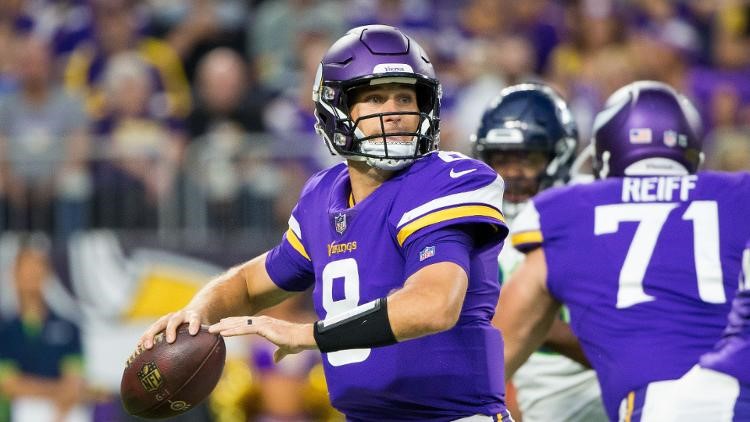 Kirk Cousins is on a tear after being attacked for being too conservative and just generally crap and his price has risen dramatically. However, I still think he’s worth $5,800 and he could realistically keep destroying defences with the players around him. This week they face the Lions and they have two good corners in Slay and Coleman who is primarily in the slot. That more than likely means Diggs will have another game where he doesn’t do much, but I think Thielen could go off again. The reason I think this is because the Lions are still giving up the fifth most passing yards this season, so those yards are coming from somewhere and I don’t think Kyle Rudolph is going to dominate. I’ll happily take Cousins four TDs, 333 yards and 76% completion rate from week 6. 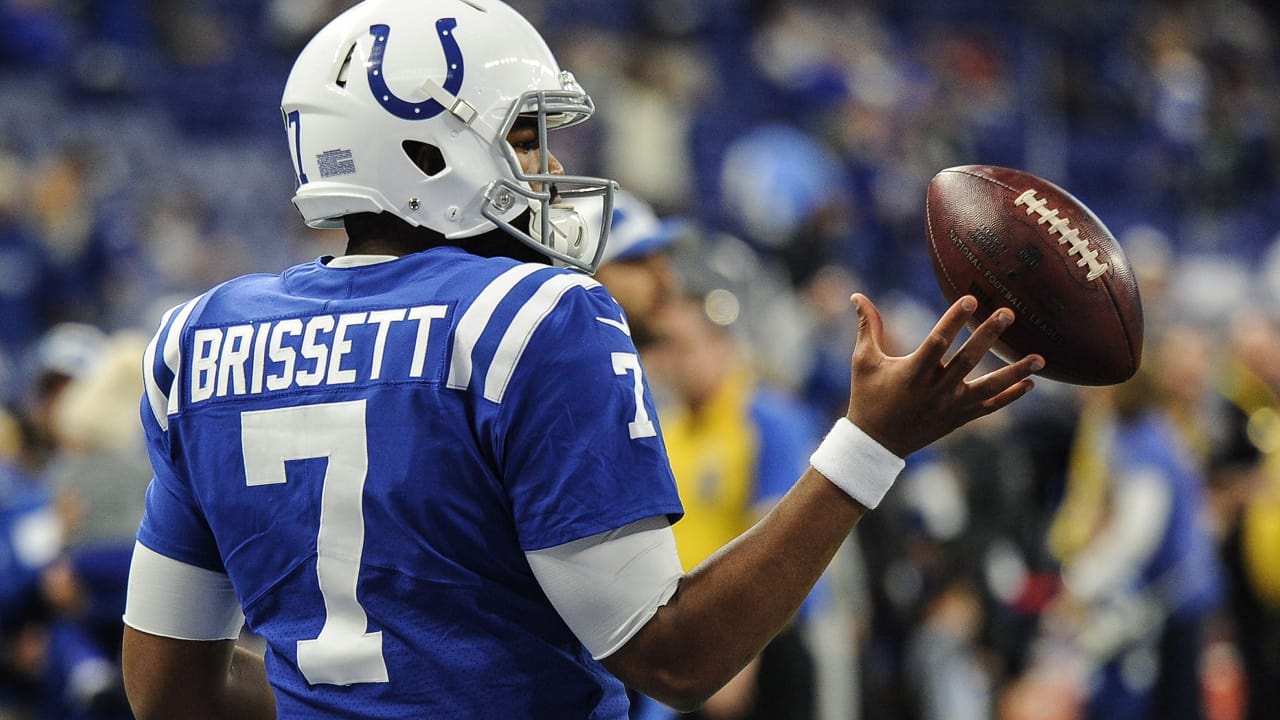 You’re an idiot if you think the Texans have a defence that will be able to compete in January. From the six QBs they’ve faced this season, the only two they haven’t given 20+ fantasy points to are Gardner Minshew in his first start and Kyle Allen in his second career start. This week they are facing the Colts and Jacoby Brissett is coming in after his bye week. TY Hilton will be coming in hopefully fully healthy and this rest of his weapons should be back to full strength. At $5,600 Brissett is quietly fantasy QB 12 and probably wishes he didn’t sign that new deal before the end of the season. The Texans top corner Jonathan Joseph has been dealing with a hamstring issue which isn’t great considering he’s probably one of the slower corners in the league anyway. It doesn’t get any better for the Texans as rookie Lonnie Johnson is graded as the fourth worst in the NFL. Expect a big day from this offense. 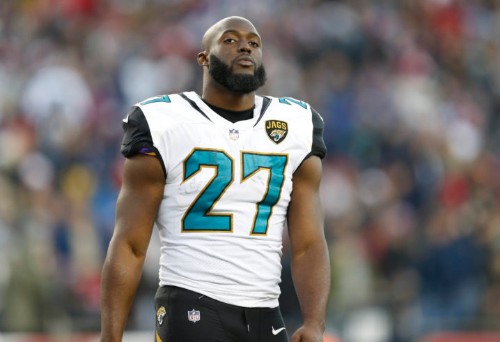 We all know Christian McCaffrey is having an insane, volume filled season and could be a front runner for MVP. Leonard Fournette is actually 2nd in the league in terms of touches yet has only one touchdown. You have to think the scores have to happen at some point, he can’t just continue to pile up yards and not find his way into the endzone. I’ll admit, I didn’t see this season coming for the Jags running back, I thought he was a bum but I’m glad he’s proving me wrong. For $7,000 you have one of the top backs in the league against the porous defence of the Cincinnati Bengals who allow 20 more yards rushing per game than any team not based in Miami. I forgot to mention he is also leading the league in running routes out of the backfield. I expect a monster day from Fournette. 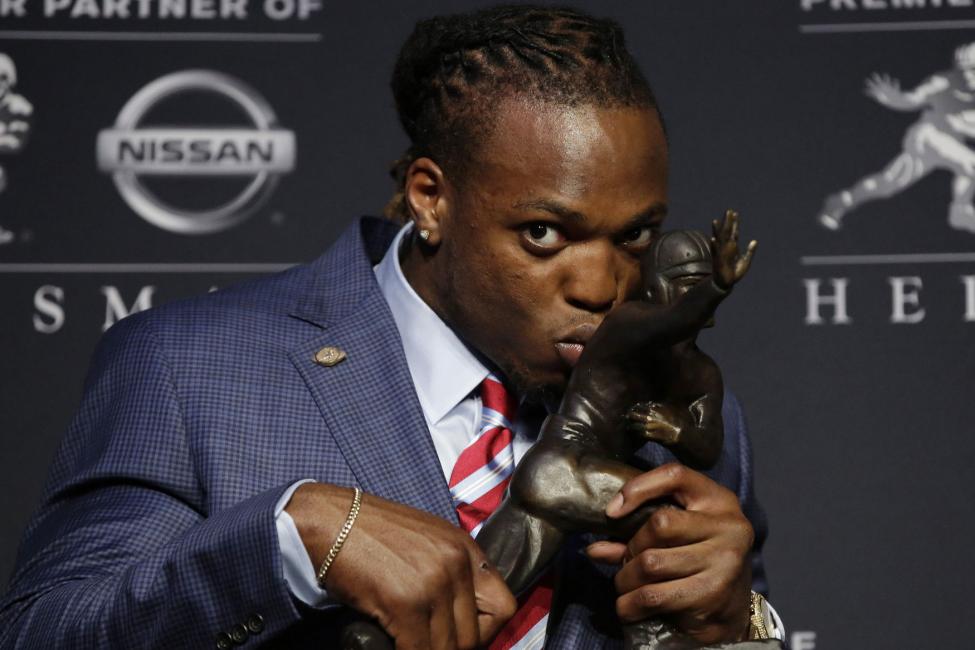 Last week against Denver, the Tennessee offense was completely shut out and Mariota was rightly sent to the bench. Whether Tannehill can save Mike Vrabel’s job is another question and I’d lean towards no, but stranger things have happened. However, since they are going with Tannehill now, it would make you think they are going to lean very heavily on Derrick Henry and the rushing attack going forward. Against Denver, Henry had his lowest fantasy output since week 12 of last season and although he doesn’t have many standout games, he’s very consistent. For $5,800, you’re securing a guy who out of his last 10 games has gone over 75 yards and scored a TD in 8 of them. The Chargers couldn’t stop the Steelers running backs last week and they knew that Devlin Hodges at QB wasn’t much of a threat. If Conner can have a huge game, then Henry definitely can against a unit that’s allowing 4.6 YPC. 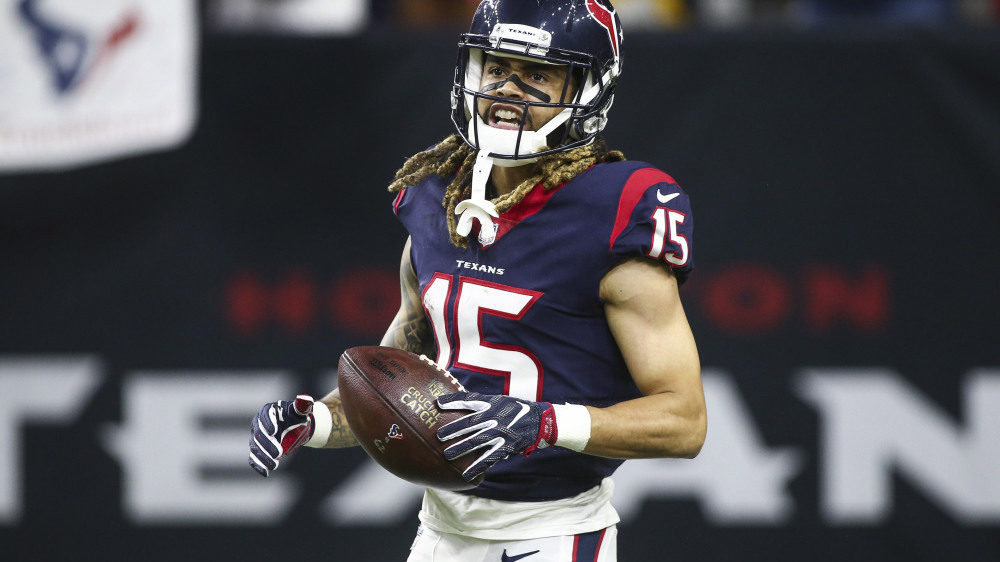 Will Fuller kind of disappointed all the point chasers last week after his insane 40 bomb in week 5. However, if he didn’t drop three of his targets against the Chiefs, he would have been averaging 40.5 points the last two weeks and everyone would be thinking his price of $6,200 was way too low against a below average Colts secondary. Deshaun Watson’s protection is starting to look legit and the longer he gets to throw, the more often he can look to Fuller as he goes deep. Indianapolis aren’t the sort of defence to let players get behind them too often but given that their pass rush isn’t particularly dominant and Fuller has game breaking speed, I could see this becoming a shoot out with a lot of long gains. 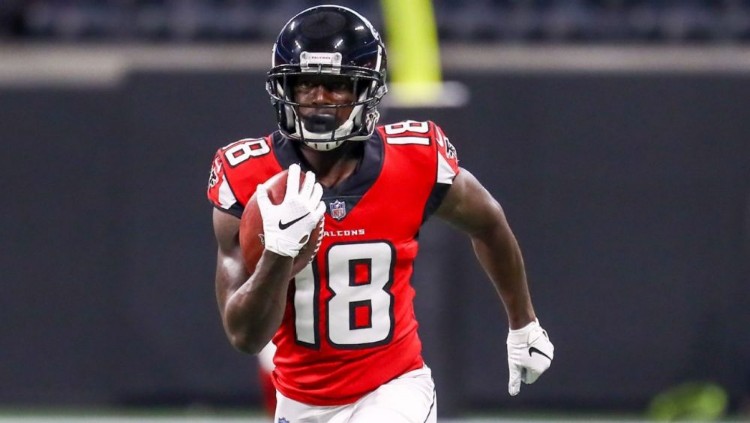 Matt Ryan has yet to have a game where he has thrown for less than 300 yards and that streak shouldn’t be lost against a Rams defence that is struggling to say the least. Yes, they did just acquire Ramsey and he will likely draw the toughest assignment in the league, covering Julio Jones all game. Jones could embarrass Ramsey but it’s more likely he’ll just have an average game against a top corner. Ryan will likely look for his other targets, namely Calvin Ridley who costs just $5,300 and will be lined up opposite Troy Hill, a career backup replacing Peters who was traded and Talib who was sent to IR. Ridley averages over 14 yards per catch and has four TDs this season so he might be big play dependent but that shouldn’t be an issue this week. Mo Sanu might also be a nice play for you here if you’re struggling for cash at $4,600 as he also has a very favourable matchup. I could see the Falcons winning this game if their defence doesn’t give up 40 points which is a concern every week. 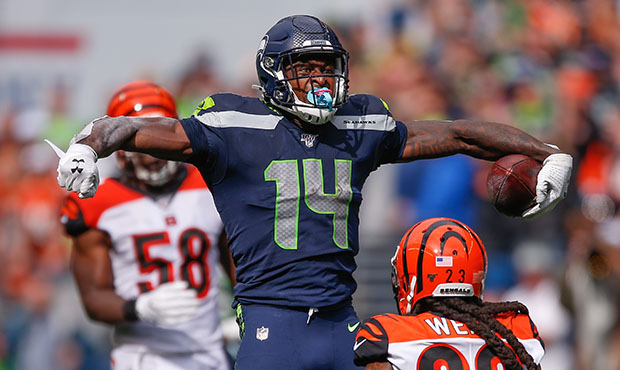 DK Metcalf’s price has remained relatively stable at around $4,800 for the last few weeks because we haven’t seen a lot from the rookie and his route tree remains limited. Against the Ravens this week I could see it being his big breakout game that sends his price to the sky. There are a couple of factors that make me believe this against the Ravens. For one Marlon Humphrey the team’s top corner has held OBJ, Schuster, Hill and Boyd to 80 yards combined so that could mean Lockett will be AFK for a lot of the game. Wilson is throwing a hell of a lot so those targets will have to find someone else and it won’t be Will Dissly who went to IR this past week. The second factor is that they may try to put newly acquired Marcus Peters on Metcalf. Peters is talented there’s no question but he’s undisciplined and gives up big plays routinely which is Metcalf’s bread and butter, he runs downfield for long plays. If the Ravens, try to put anyone else on him then it’ll be the same as every other week they give up the 2nd most yards on deep passes and 2nd most yards to No. 2 receivers. This could be big for the rookie. 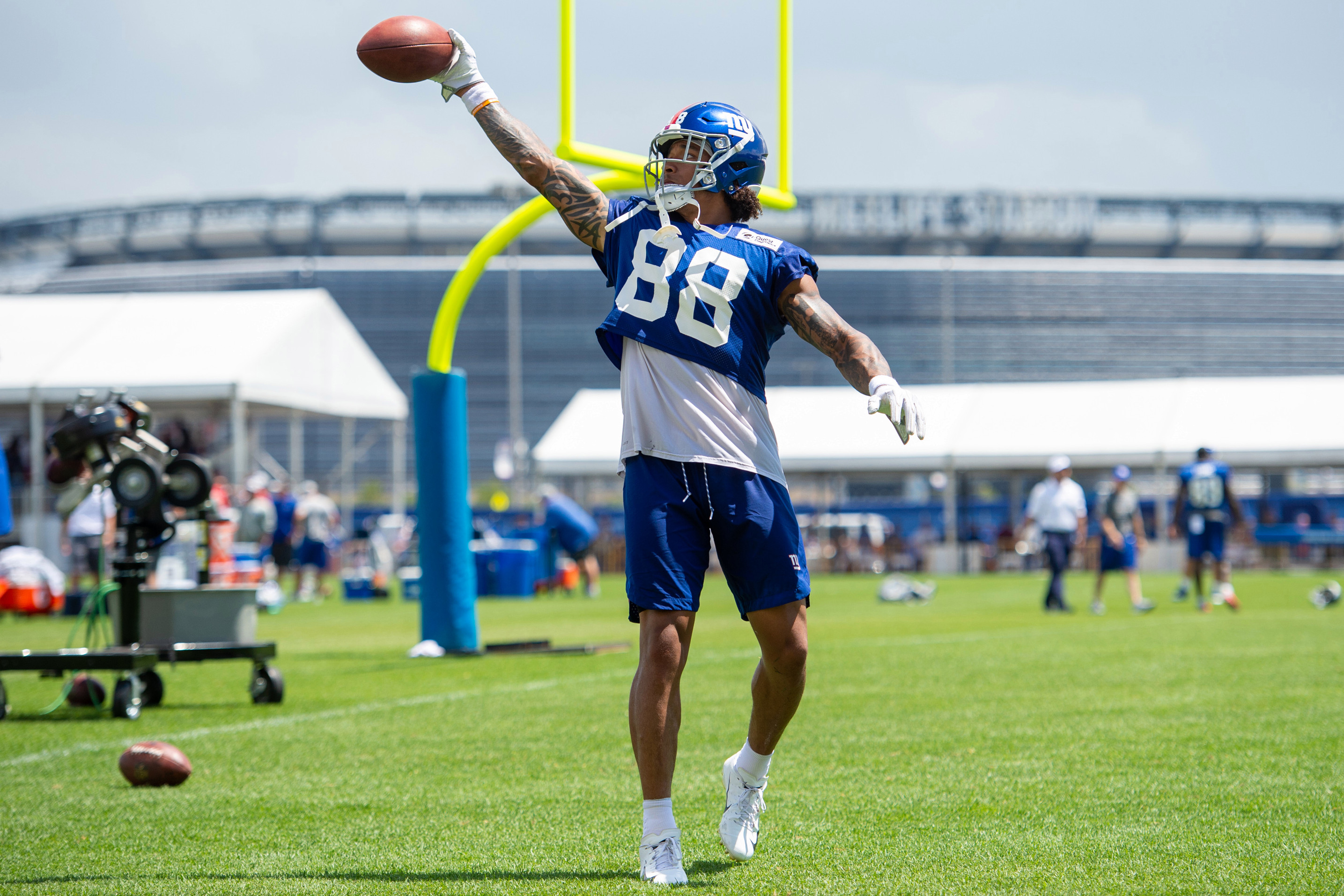 It’s week 7, we’re not changing now, I have to choose Evan Engram for $6,500 against the Cardinals. He’s the most talented tight end the Cards have faced all season and it should be a royal spanking.

I was going to put Hunter Henry in this spot for his insane price of $4,000 but I think rookie tight end Dawson Knox in Buffalo for $3,300 against Miami is just as tasty of a proposition. John Brown, the Bills leading receiver will likely have a hard day against Howard in shadow coverage which leads to a few more targets elsewhere. Knox has seen his role increase and has hauled in some magical catches along the side-line in past weeks. He had a bit of a rough outing in Tennessee but against the rest of Dolphins secondary he should have mighty fine bounce back. 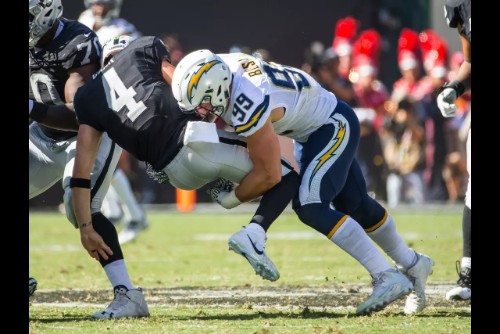 Facing a Tannehill led offense is not something that will keep the uber talented Chargers secondary up at night. It shouldn’t be hard to shut down the Titans receivers, but we could see a score or two from Derrick Henry (I PRAY.) I don’t trust Tannehill not to throw picks and or fumble, so I think the Chargers dominate here for $3,100 and score a good amount of points.

A frisky defence that is allowing the team to continue to roll without worrying about scoring in Drew Brees absence. Lattimore is a true shutdown corner and the Saints are one of the top teams in NFC thanks to their defence. The Bears are yet to cross the 300 yards of offense mark in a single game this season and they won’t cross that mark this week either. Could we see a shutout from the $2,900 Saints defence?

RB Latavius Murray $5,100 [email protected]: Tough matchup against the Bears but Kamara is out, and I think there’s good TD upside.

RB Frank Gore $5,200 [email protected]: Could go Singletary but I’ll never not be rooting for this future hall of famer.