Get notified when new draws open!

All profits from this raffle will go to growth and support initiatives within domestic grassroots American Football in the UK and Ireland.

Tickets are only £1 each.

There is no ticket limit for this raffle, more tickets will be added as needed.

The draw will be made live on our Hail Mary Hits Facebook Community Group, please join us by clicking here.

All of our signed memorabilia comes with a Certificate of Authenticity and can be checked at the relevant website: Fanatics / Beckett / JSA

No tickets remaining for this draw

Born in Baton Rouge, Louisiana, Beckham played college football at LSU and was drafted by the New York Giants in the first round of the 2014 NFL Draft. Since entering the NFL, Beckham has been one of the league’s most popular players.

Beckham started the 2012 BCS National Championship Game in his first year playing at LSU, and won the Paul Hornung Award following his junior season in 2013. In his first season with the New York Giants, Beckham broke numerous NFL rookie receiving records, despite missing the first four games of the season due to injury. Beckham became the first player to record more than 75 receptions, 1,100 yards, and ten touchdowns in a rookie season, and broke the rookie record for the most average receiving yards per game. During Week 12 of his first season, Beckham came to national attention when he made a one-handed touchdown catch whilst falling backwards in a Sunday Night Football game against the Dallas Cowboys, which numerous pundits and athletes called the greatest catch ever made. Beckham won the 2014 Offensive Rookie of the Year award.

In 2016, he became the fastest player in NFL history to reach both 200 career receptions and 4,000 career receiving yards. In 2016, he recorded his first 100-reception season and reached the NFL playoffs for the first time in his career, after helping the Giants to an 11–5 season record. Beckham was named to the Pro Bowl in each of his first three seasons and has been named a second-team All-Pro twice. 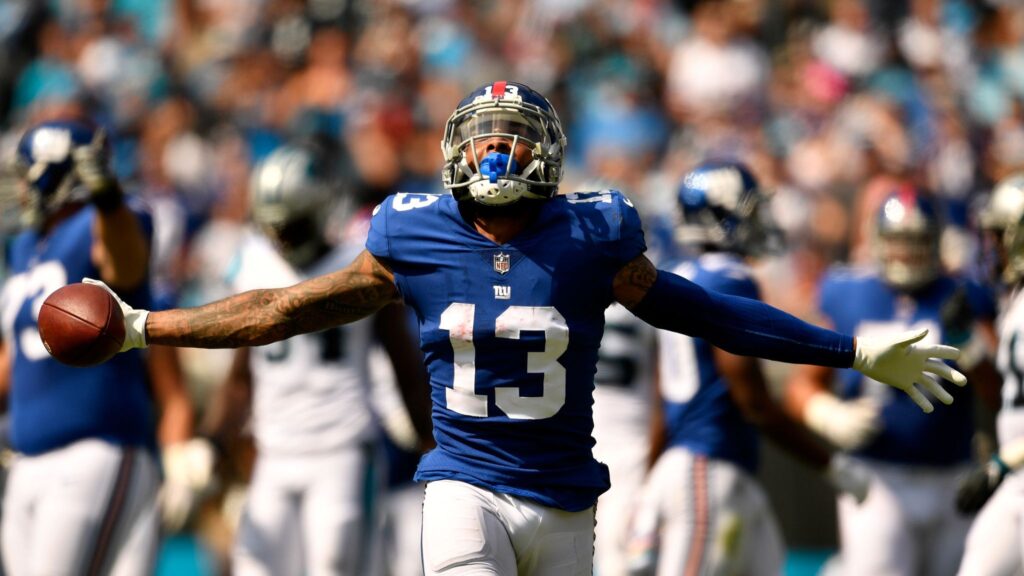