So the other weekend I sat down and watched a pretty explosive game of college football between Ohio State and TCU. Although Ohio State won the game 40-27 it got me thinking about the defence that TCU plays and researching Gary Patterson the TCU Head Coach. From there I stumbled upon Gary Patterson’s article in the 1997 AFCA Summer Manual on the internet entitled “Multiplicity but simplicity: why the 4-2-5 Defence” ( I know that’s some stumbling) which I digested and found thought provoking so I have chosen to base this post on it as I was looking for a defensive topic anyway. 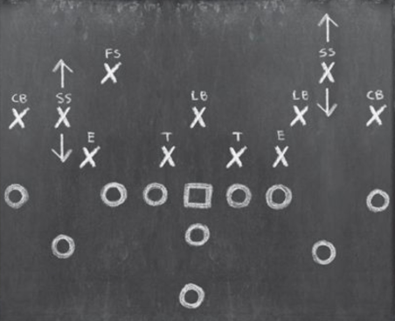 At its core the 4-2-5 is a Nickel defence, so called because there are five defensive backs, two linebackers and four down defensive linemen. However its not just another defensive back thrown on the field at the last minute to defend against an obvious passing situation, in the every down 4-2-5 the extra defensive back is a strong safety type of player that can be equally effective in playing the run as in pass defence. This puts two strong safeties on the field together that can attack forward or drop back providing a faster overall pursuit which is critical against four or five receiver sets.

In his article Coach Patterson outlines five basic principles for the 4-2-5 to succeed.

1. Create offensive confusion at the Line of Scrimmage

The way that Coach Patterson achieves confusion at the LoS is by separating the front and the coverage before the snap. By separating the defence into three separate units this allows for a lot of flexibility and great disguise capabilities as the units can work independently from one another. The base front can run different stunts and slants while the two sides of the field can use different coverages, run responsibilities and pre snap movement to create confusion. In the picture below the weak safety is responsible for the coverage call for himself and the weak side cornerback while the free safety is responsible for the other three backs and the Mike backer is responsible for the base front call. In this way a young player new to his role can rather than learn the whole defence just learn his part in it before transitioning to one of the leadership roles which still doesn’t involve learning the whole defence merely his particular unit within it. 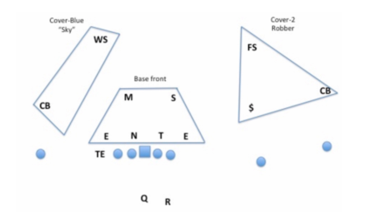 When defining leverage Patterson in his article says “ The phrase is inside and in front …as long as all eleven players keep the ball inside and in front of them then good things will happen”. This way the defence keeps good pursuit angles and forces the ball back to where there is help in effect surrounding the ball carrier.

Establishing the eight man front is important to the workings of this defence as it has to be able to stop the run first if it can’t do that nothing else matters. The 4-2-5 front allows the defence to always try to have one more player at the point of attack than the offence. It is vitally important therefore to get your defensive backs to buy into the fact that they are needed for run support. Playing with six in the box you want the ball to get pushed to the outside safeties. The safety’s leverage on the outside then allows the front to slant or stunt anyway they need to control the LoS. With three safeties on the field it allows for the possibility of nine players stepping up in run support but you must be aware what you are giving up in coverage by doing this.

One of my favourite sentences in the article from Coach Patterson is “The threat of a blitz to an offence is sometimes worse than the blitz itself”. The threat that you can bring between five and eight players on any given down must exist in the offences mind. This will then make the offence have to account for all eight players on all runs and passes. Patterson does this by being simple enough to handle all the different formations they may see in the game yet multiple enough to take advantage of an opponents weaknesses.

Patterson finishes his article by outlining what he is looking for from his five spoke secondary. Since the athletes available to TCU weren’t the same standard initially as those of the bigger programs in Texas such as UT he pinpoints speed as the priority in his players. Recruiting corners who might turn into safeties and more athletic safeties who can grow into linebackers. The main advantage he sees from a five man secondary though is that he never loses the disguise element as he can in a four man secondary. In five man he can show blitz to one side and coverage to the other. The third advantage is the natural alignment leverage that the three safety system brings as it allows the defence to move the front six around without risking a leverage problem. The outside blitz position of those safeties makes the offence account for them on every single play.

This defence was nicknamed the spread stopper and with the right personnel playing the right way it can be. The spread was designed all those years ago to force the defence to take some big guys off the field and cover more receivers beating defences with speed rather than raw power. The defensive answer was to beat them at their own game and get faster and smaller at almost every position and it worked…. For a time.