You’ve built your base of general strength, you can shift some tin and you’re looking to boost your performance even more. In this article I won’t fuck around with too much science, I’m just going to spam you with various exercises and how it can translate into athleticism.

Most people who’ve been in the gym for a while will rip you for not squatting below parallel, but quarter squats actually have a huge application to sprinting and vertical jumping (provided you’ve built a strong base first). If you consider the positions that you play in, it’s rare for the ankles, knees, hips to bend even close to parallel, let alone a full ass to grass squat. Producing force within these limited ranges whilst squatting will directly translate into better sprint speeds and vertical jumps, but you need to ensure you aren’t using the same weight as you’d normally squat full depth and load them up. Despite being a limited ROM you need to still hit those strength rep ranges and work hard. 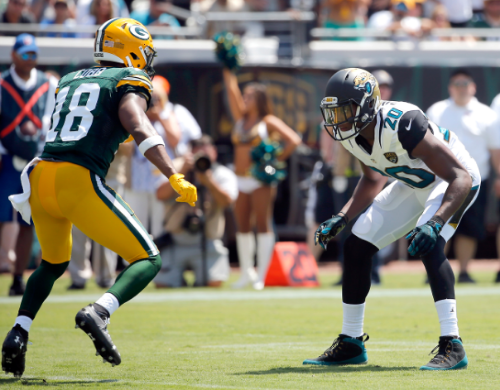 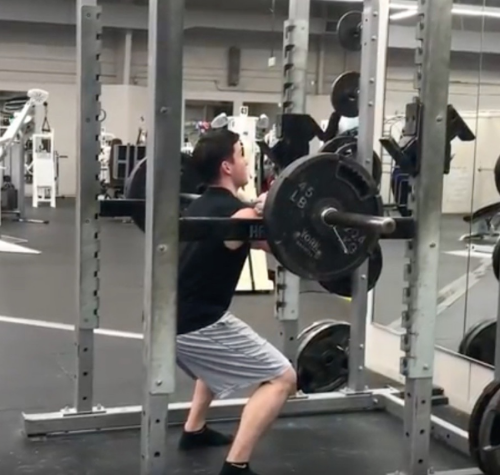 Then maybe you’ll be able to jump like him pretty soon. 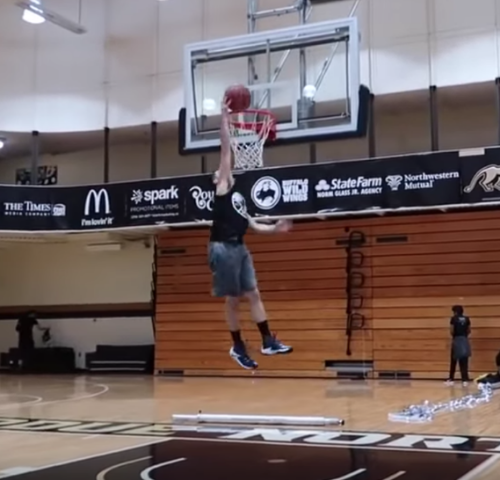 Similar principle to the quarter squat, you spend a lot of time on field in positions higher than the pulling position of a conventional deadlift. You can adjust the height of the bars or boxes you place the weight on to suit your needs. 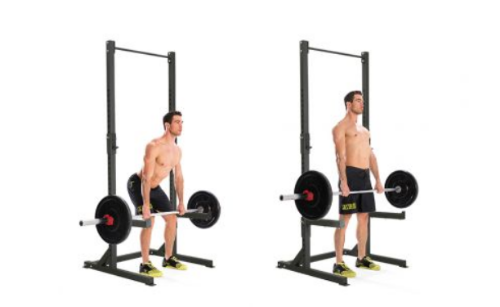 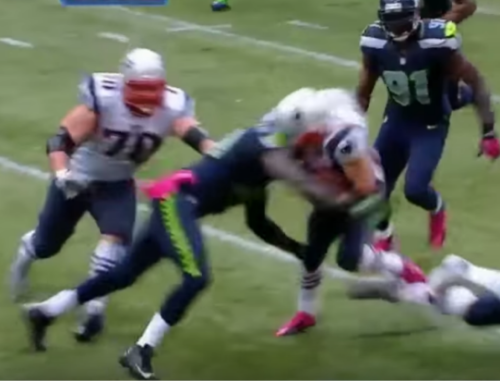 The pause you have whilst sitting on the box takes all strain out your legs and glutes with each rep. In plenty of positions in football we’re required to produce a lot of force out of a static position e.g. an O lineman coming out his stance. Not only does the box all us to replicate the start of the play better than a conventional squat, we can also alter the range of motion with different box heights to suit different positions. 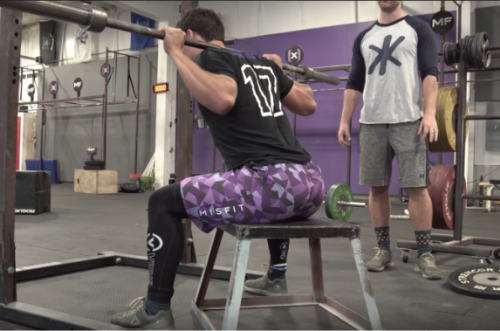 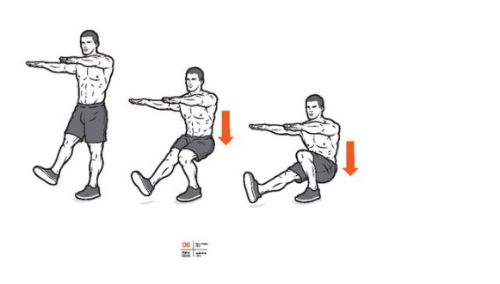 Bilateral vs Unilateral argument again. We’re often required to produce and adsorb force off a single leg in football, in particular you’ll experience incredibly high amounts of eccentric loading (muscles lengthening whilst adsorbing force) such as landing on a single leg whilst leaping for a catch in stride. Gaining the strength to control your body weight with a single leg in a movement like a pistol squat or split squat will translate fantastically into your sprinting, deceleration, jumping and landing ability as well as including huge decreases in serious injury risk.

A weighted step-up is also a sound exercise for unilateral development in those ROMs. 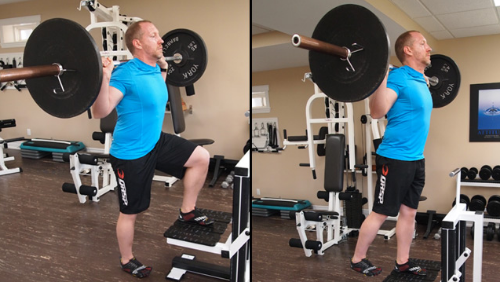 A conventional deadlift is too low, for some skills a rack pull is far too high. Something like a trap bar is a much better position to be pulling from for some skills e.g. tackling, DB stance, RB running low. 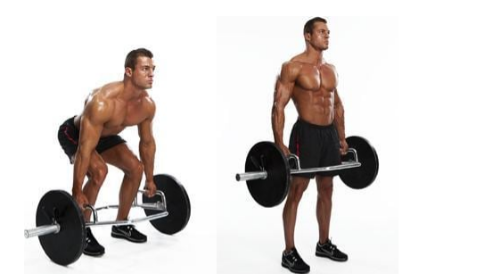 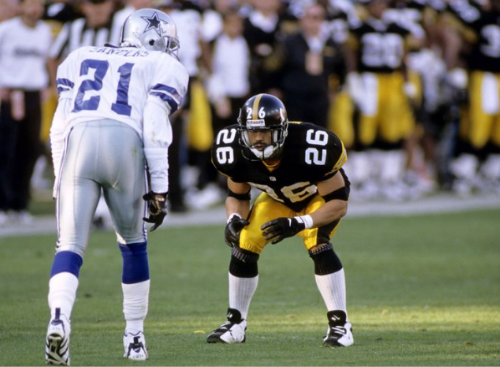 Consider how often you pull anything in football with two hands perfectly level? Maybe a push/pull block shed or grabbing cloth on a perfectly square up top form tackle could be argued, but plenty of tackles are made at an angle, strip attempts and ball security is certainly never performed in a bent over row style position therefore it’s vital to train arms to pull independently. With regards to sprinting, a large proportion of sprint speed comes from arm drive and having a core able to cope with your limbs swinging. A single arm row gives you a pulling motion that replicates a single arm moving during a sprint whilst training your core to cope with the forces acting against it. Avoid kneeling on a bench whilst doing this as you lose half the core stability benefits. 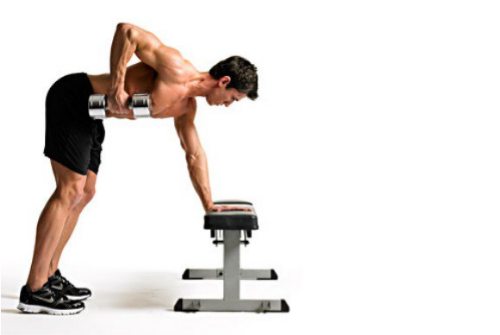 Single arm pressing whilst bent at the hip, knee and ankle? A landmine press is a great exercise regardless of where you play, as it allows you to adjust your standing position to suit your needs. By changing your stance, you can pretty easily imitate all pressing positions in the game – you can even do this two handed! Plenty of gyms have little attachments to stick the bar into, but if yours doesn’t have one jam one end into a corner or between two heavy plates to get it to stay in place. 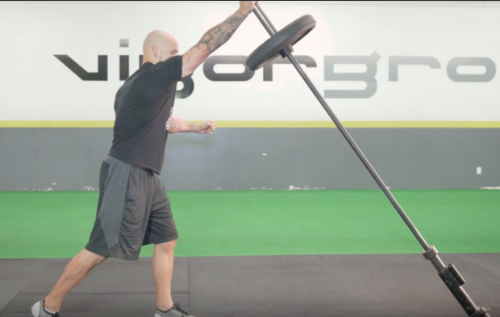 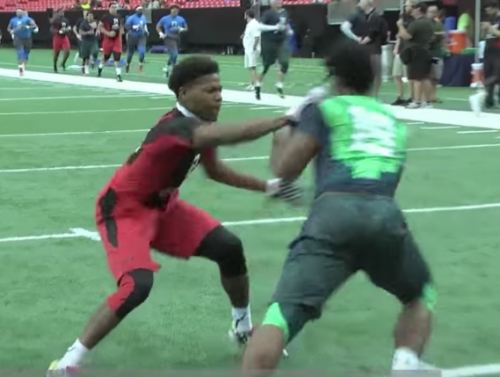 Tilt your head and check the angle the D lineman here would be pushing at if he were lying back down on a bench. We’re often taught to keep a low pad level and maintain a forward body lean when performing rushing techniques, run blocks, press etc. Incline bench is going to translate far more into your sports perf. 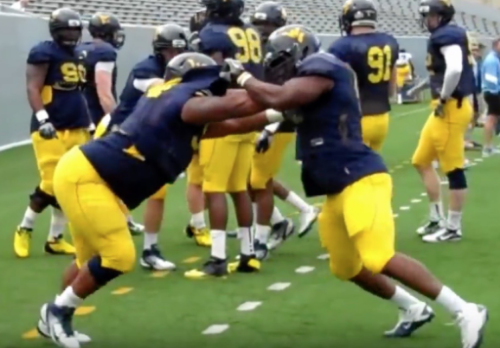 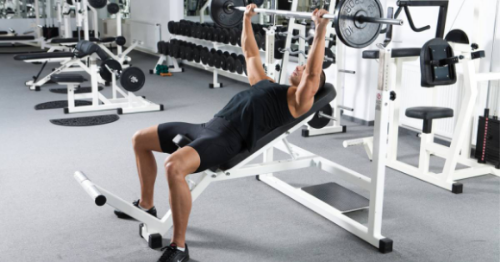 Similar to above, everyone loves to bench, but your arms aren’t always acting perfectly in sync with skills like a stiff arm, club and rip and press technique all requiring a lot of force to be produced with a single arm. This is a weird feeling exercise but it’s fantastic for core development and stability around the shoulder. 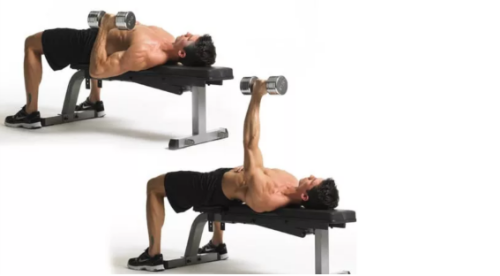 Fun one. Much like the rack pull and quarter squat argument, in general we don’t produce force from the full rep bottom position on a bench press, we largely want hands starting in a half cocked position in front of us ready to block or press a player. By floor pressing, we can rest our muscles at the bottom of a rep once our elbows reach the floor. As we go to rep we’re required to produce a huge amount of force to overcome a dead weight from the restricted motion position that we use more often in football. Absolute banger of an exercise. Would recommend using a barbell and dumping the weight over your head between sets for safety if you haven’t got a spotter about. I’ll cut this here as really this could go on for 20 pages with every little tweak and variation you might need, hopefully this has given you a few ideas as to how changing a pulling position etc. can translate into better performance for your position. Feel free to tag me in the comments to ask me any questions or if you’re wondering if something is a good idea.